When listeners describe singer-songwriter Heather Styka as an “old soul,” the term applies to more than the wisdom beyond her years in her writing. Styka’s tunes have a vintage familiarity that draws inspiration from folk and Tin Pan Alley sounds, but the vivid images of her lyrics render her songs as fresh, smart, and unexpected as they are hummable. Also a poet and writer, Styka crafts songs that analyze moments, places, time, changes, solitude, relationships, and community. In addition to numerous songwriting awards, her 2011 release Lifeboats for Atlantis received critical praise, hitting #3 on the national FOLK-DJ charts. With a distinctive guitar style and a pure, soulful voice, Styka’s performances feel as candid as late night conversation and as comfortable as coming home.

Heather Styka originally hails from Chicago, where she started writing and performing at fourteen. She spent the subsequent decade performing throughout the Chicago area, and after obtaining a degree in creative writing, began touring the Midwest and Northeast. Her 2011 release Lifeboats for Atlantis brought her to national attention, ending up on a number of radio DJs "best albums of the year" lists (Midnight Special, WFMT). In the spring of 2013, Styka uprooted and moved to Portland, Maine, where she quickly became part of New England’s folk and Americana scene. “I’d been yearning for open space,” says Styka of her move. “And in Maine I found it, while staying connected to a community that inspires me.” The songs of Heather Styka’s upcoming record, While This Planet Spins Beneath Our Feet, reflect the surroundings of her new home state, conjuring images of fields, forests, and ocean, amidst the changing of the seasons and the passage of time. 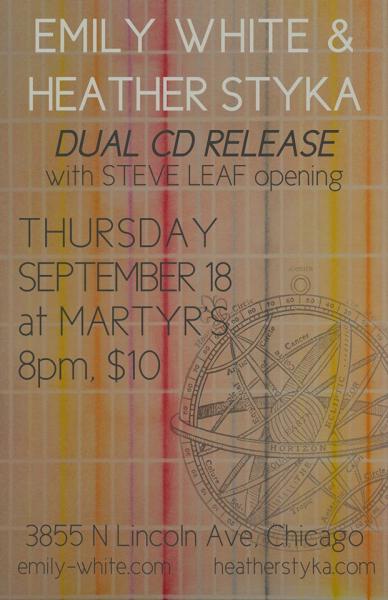